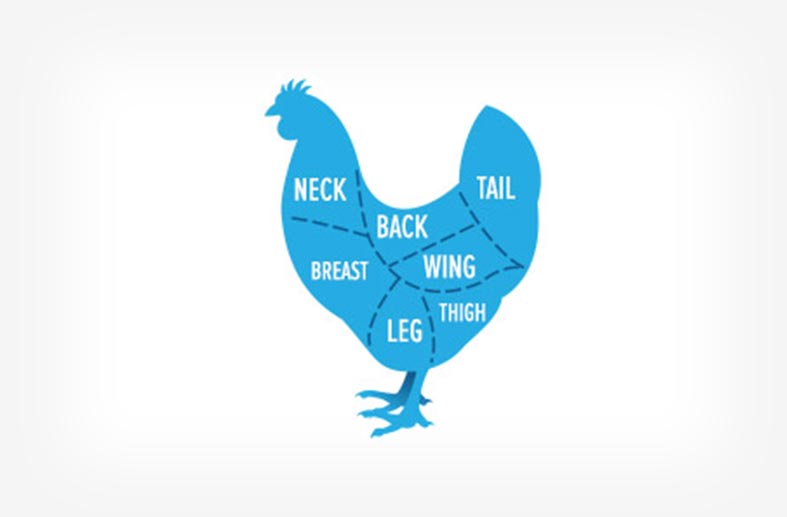 Some parts of the chicken are very obviously useful (the breast, the legs, the wings the thighs, etc.)  Some parts--you would think--are less so.  But some of the ones that you would think are less valuable, really have a lot of value.  For example, apparently chicken paws (that’s what the feet are called by chicken farmers) are pretty valuable.

"Twenty years ago, not only were chicken feet almost completely useless, chicken farmers had to pay to get rid of them. Most of the time, they would end up as a filler in dog foods. In the 1990s, globalization became a more feasible reality for smaller companies aspiring for a transnational business model, and chicken farmers started profiting from the sale of chicken feet to China."1

"Thanks to huge demand in China, paws have become big profit centers. The U.S. now exports about 300,000 metric tons of chicken paws every year. Perdue alone produces more than a billion chicken feet a year, which according to (Carlos Ayala, the Vice President of International at Perdue Farms) brings in more than $40 million of revenue. In fact, Ayala says that without the paw, chicken companies would be hard-pressed to stay in business."2

My guess is for most of us, the thought that chicken paws are important, let alone vital to chicken farming profitability is – well—less than intuitive.

But finding value in interesting places, has always intrigued me.  What else in the World seems to have limited value, hidden value or in some instances a cost, but really is a valuable asset?  This is not an easy question.

In the context of investing, Warren Buffet described the concept this way in Berkshire Hathaway’s 1989 Chairman's letter--“I call this the ‘cigar butt’ approach to investing. A cigar butt found on the street that has only one puff left in it may not offer much of a Smoke, but the ‘bargain purchase’ will make that puff all profit.”3

This brings me to the chicken paws of the analytics world--that being valuable data exhaust.

"'Data exhaust' is the information created as a byproduct of digital activities."4

Let me offer this to explain.  So lots of folks look at exhaust the wrong way (thinking all parts of the chicken have value), they view it from the data side first.  But that is not the right way to view it, we must view it from what is your business goal or question first and how does your data exhaust help you solve or answer that question (chicken paws have value because of the market in China and the ability to sell in a global market in China).

Steve Weber a professor at the University of California School of Information's data science program put it best, by saying, “Hey, what should we do with our data?   Perhaps you've heard, or asked, that question before. It's a common query these days, a byproduct of the growing interest -- some may say obsession -- with big data and data science.  Unfortunately, it's not the right question to ask ... ‘A better question is: 'What do my customers really want and need and desire? And then: 'What kind of data would I need to collect, and what would I need to do with it to help them?'’ Sounds like obvious stuff, Weber admits, but it's a pragmatic approach that big-data-obsessed organizations often overlook.  When you start with the data, it's like putting the cart before the horse,’ he says. ‘It's an obsession with the tools, an obsession with the data exhaust. You're searching around in the haystack for the needle.’  It's far more efficient, he asserts, to start with a core business question. Example: What value-added service or product do I want to provide to my customers, but can't today? And then the follow-up: What data would allow me to design it?”5

So what is the point?  Chicken feet have value (who knew?).  Some data exhaust is like chicken feet (we all kind of know this).  But it is hard to tell what exhaust is chicken feet.  To figure that out, we need to start with the business question not the data.  If you need help with the application of the data to the question, we (Othot) know something about this.  The chicken feet, not so much.